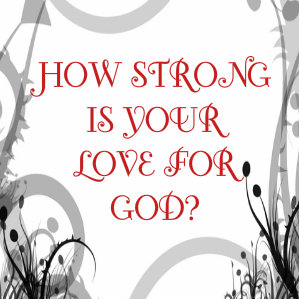 Those who are part of the generation I grew up in would remember the 1977 pop hit ‘Torn Between Two Lovers” sung by Mary MacGregor. It spoke about a lady who was attracted to 2 men at the same time. In the lyrics she tells one of them,

‘It doesn’t mean I love you less’ but ‘there’s just this empty place inside of me that only he can fill’!!!

This raises a question. Can we love 2 things equally at the same time?

Jesus in the passage in 1 John 2:15-17 says, “Do not love the world or anything in the world. If anyone loves the world, the love of the Father is not in him.” It is therefore clear that Jesus is saying that we cannot love God and the world at the same time. In other words, He’s saying that our love for one will be greater than the other!!

Today’s sermon is titled ‘Torn between Two Loves’ and on this Valentines’ Day week, when ‘love is in the air’, I would like to highlight the following 3 areas where people could be torn between their love for the Lord and their love for other attractions. None of these things, if handled right, are wrong by themselves, but they have the potential to quench our love for Jesus very quickly. They are,

It is a very real fact that money controls the systems of this world. We feel a sense of injustice at how wealth gets distributed, and the control and power it gives people. As such, we may be tempted to place much value on getting more of it; a slice of the pie! Sadly, in the process of getting more, we can often place our desire for money above our desire for the Lord.

Although money in itself may not be evil, the Bible in 1 Timothy 6:9-10, warns us of the temptations that come with riches. It tells us that “the love of money is a root of all kinds of evil”. It really is amazing how easily money can distract our thinking and become an idol that controls us. The more money a person makes, it tends to become so much easier to lower one’s standards, and to strive to get more at any cost!! A quote I came across says,

‘Usually, when a man’s bank account increases, his soul shrivels’!!

Jesus Himself said, “No one can serve two masters. Either he will hate the one and love the other or he will be devoted to the one and despise the other. You cannot serve both God and money” (Matthew 6:24). A man of God said it in a different way in the following quote:

‘You are not fully surrendered till your cheque book/purse is surrendered’.

Bible Illustration – In 2 Kings 5: we see how Elisha refused to be tempted with the riches of Aram (2 Kings 5:15-16), but how Gehazi’s greed, surrounded by lies and deception, led to severe judgement upon him & his descendants (2 Kings 5:22-27). We are also reminded of the example of Ananias and Sapphira in Acts 5:1-10.

ILLUSTRATION– I remember a Pastor telling me that once when he was about to officiate at a wedding, he noticed a commotion in one of the church rooms. Upon checking as to what the problem was, he found out to his horror that the two wedding parties were having a heated argument over the dowry to be given by the Bride’s family!!!

If you are battling between loving God and loving money, I would like to suggest the following actions.

A) Learn to be a giver. It’s a great antidote for greed! Here’s a good quote to memorize:

‘A love for the right use of money can be the root for much good’!!

So, let’s not allow money to ever become an idol in our lives.

“People will be…..lovers of pleasure rather than lovers of God…” (2 Timothy 3:4)

According to the above verse, the search for extensive pleasure in today’s world is actually a fulfillment of a prophetic sign of ‘the last days’. James also warns us, “Don’t you know that friendship with the world is hatred toward God?” (James 4:4)

We have seen in our generation, how the pleasures of the world have become more corrupt, more vulgar and more brutal than ever before!! This is seen in sports, entertainment, cartoons, movies and almost all areas of pleasure. The question is, is our pursuit of pleasure taking us away from our pursuit of God’s holiness? Away from giving quality time to God and ministry? Are the heroes of ‘Star Wars’ more attractive to our children than the Lord? I remember a poem I once read which asked the question whether our time and attention is given more to the Bible or the TV Guide!!

Bible Illustration – Towards the end of his ministry, Paul makes a very sad statement about one of his co-workers. He says, “Demas, because he loved this world, has deserted me…” (2 Timothy 4:10). We also read in the Book of Judges how Samson lost his powerful anointing, thanks to his relentless search for pleasure.

If you are struggling with the love of pleasure controlling your life, a good step forward might be to separate some of your time to serve God in a ministry in your church, or to volunteer for some worthy cause. Spending quality time in God’s presence will also help greatly. The Bible says, “…In Your presence is fullness of joy; At Your right hand are pleasures forevermore” (Psalm 16:11 NKJV).

That brings me to my final thought.

3) TORN BETWEEN LOVING GOD AND LOVING THE PRAISE OF MEN

In John 12:43, the Apostle tells us the following about the religious leaders of His time, “..they loved praise from men more than praise from God”. Are you in a similar situation today?

We live in a world of celebrities and sadly, the celebrity cult has invaded the Christian domain as well. Leaders get caught up with numbers and stats and the recognition they get on social media. Sadly, the adulation and compliments we receive from humans, can after a while, become more important to us than having God’s approval. We can even lose the spiritual sensitivity needed to hear His still, small voice.

Bible Example – in 1 Samuel 15, we see God’s rejection of King Saul due to his disobedience. However, without repenting, Saul’s response in vs 30 shows that he was more interested in looking good before the leaders and the people!!

Are we too more concerned about what people think of us than about what God thinks? Are we as a result, silent, when we should be speaking up? Do we fear losing favor with our peers, our bosses and our relatives? When needed, do we avoid correcting the people who praise us? Billy Graham said,

‘Any coward can praise Christ, but it takes courage to follow Him’.

Illustration – In chapter 1 of his book, ‘Then sings my Soul, the well-known Gospel singer George Beverly Shea writes about how he was offered a contract to sing with a famous singing group of his time. This break would more than double the salary he was earning at that time, besides bringing him national radio exposure (recognition by man and popularity). However, as he looked at some of the lyrics of what he would have to sing, Beverly Shea decided that he would not be able to do so, as a child of God. Hard as it was, he therefore declined the offer. He desired the praise of God more than the praise of man. The end result of that decision was that George Beverly Shea eventually became the featured soloist for the ministry of Billy Graham, singing before millions of people around the world. He received not just national exposure, but international exposure!! God is truly faithful when we honor Him!!

Let’s keep a desire for the praise of God at the center of our lives.

God bless you as you work on these priorities!

wpDiscuz
We use cookies to ensure that we give you the best experience on our website. If you continue to use this site we will assume that you are happy with it.ProceedPrivacy Policy